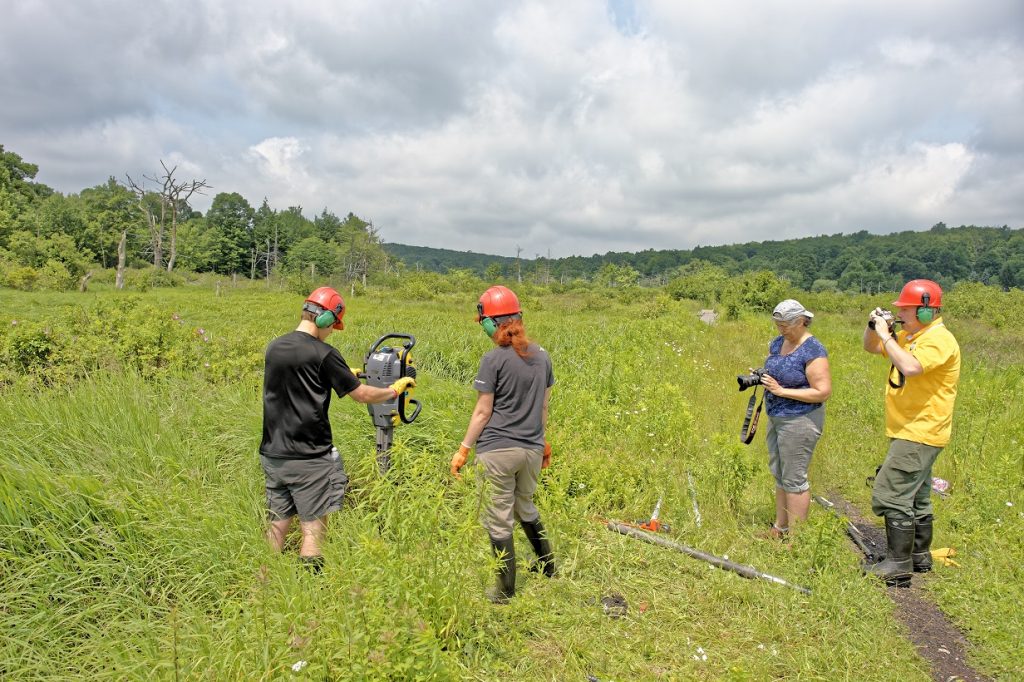 When people think of America, a frequent image is the metropolitan mega cities of New York, Baltimore or Washington DC. Frostburg is a very different experience. Located in Western Maryland, Frostburg is a classic rural American small city.  Visiting small rural cities like Frostburg will give a distinctly different American experience, as they have a “small town” feel.

Early summer is a great time to be in the Central Appalachians, and during June Vincent traveled out to Frostburg State University to provide training on a Stitz Closed Chamber Coring System. Frostburg may be 2.5 hours drive from Washington DC and Baltimore, but in reality, it is almost in a different world.  This region of the Central Appalachians is known as the Ridge and Valley Province, which are characterised by long, even ridges, with long, continuous valleys in between.  These curious formations are the remnants of an ancient fold-and-thrust belt, west of the mountain core that formed in the Alleghenian orogeny (ca 325 – 260 million years ago). The folding of the strata provides the upland depressions that are home to many small fens and bogs.

One such fen, locally known as Finzel Swamp, is the location for palaeoenvironmental research being undertaken by faculty and students at Frostburg State University (FSU). Finzel Swamp is unusual as it is a relic from the Pleistocene Ice Ages, and is a ”frost pocket,” where the surrounding ridges capture moist cold air, which then flows into the shallow valley, lowering the temperature and maintaining a landscape reminiscent of habitat found further north in Canada.   Finzel Swamp is one of the southernmost locations in the United States for some northern plants such as tamarack or larch (Larix laricina), wild calla (Calla palustris), and Canadian Burnet (Sanguisorba Canadensis).

The population of American larch trees found at Finzel is one of only two remaining populations in Maryland. American larch has been lost in four places in Maryland due to changes in climate as well as changes in natural water flow (hydrology). The Nature Conservancy manages Finzel Swamp and they have worked tirelessly to restore the natural hydrology of this swamp so that the American larch and other important species can thrive.   In order to determine what “natural” is, faculty and students from Frostburg State University are reconstructing the palaeoecology and palaeogeochemistry of the swamp.

Communications with Van Walt Ltd had been very good during the preceding year, when the grant to the Appalachian Regional Commission was being developed. As soon as the grant was awarded Vincent traveled out to provide the training.  What amazed the team at FSU was just how keen Vincent was to travel so soon after eye surgery.

The training group was a mixture of a final year undergraduate, a Masters student and a faculty member from the Department of Geography, all of whom were excited to learn how to operate the Stitz System.

Following a day in the classroom, examining the very shiny equipment and being introduced to the world of health and safety assessments, the team headed out to the swamp.

Western Maryland in June is not too hot or humid, ideal conditions for coring in a swamp, and the blueberries are not yet ripe, so the risk of a Black Bear encounter is real but quite low. However, the spring of 2015 was a wet one, and the water table was higher than anticipated in the swamp.  Undeterred by the water table, Vincent led the team into the swamp to put the equipment and the trainees through their paces.  The equipment worked without error and the team successfully retrieved cores at various depths.

Coring is an intrusive process, and some concern about the impact on an environment as special as Finzel were raised. Yet following the training and extraction of cores people from the Nature Conservancy, the organisation that manages Finzel Swamp, were on site and visibly impressed with the small footprint the team left.  In addition, an opportunity to engage in public relations presented itself and Vincent and the team rose to the occasion.  The Nature Conservancy were upgrading access to the swamp, which resulted in digging of multiple post holes.  Digging in this location is very strenuous and time-consuming work.  Vincent made a simple observation, that the open window-sampling corer is a versatile piece of equipment and could easily be used to quickly ream out holes to accommodate the posts.   Within 20 minutes the holes were dug, giving the team more experience with the equipment, and provided the swamp manager from the Nature Conservancy with a huge smile, as we had saved hours worth of work and they saw, in close proximity, how the equipment operates and does not present much risk to the environment.

Following the training the equipment was taken into the center of the swamp, and 5 meters were extracted. The coring was relatively uneventful, with only one bear encounter, and the 5 meters of sediment are currently being processed. Provisional results indicate that the swamp and associated ecological communities have been present for at least 10,000 years.  A media officer from Frostburg State University joined the researchers in the swamp for a days coring, and was impressed with the capabilities of the equipment and produced a short video interview. The team were so grateful for all of the effort Vincent and the staff at Van Walt gave the project, it was second to none.