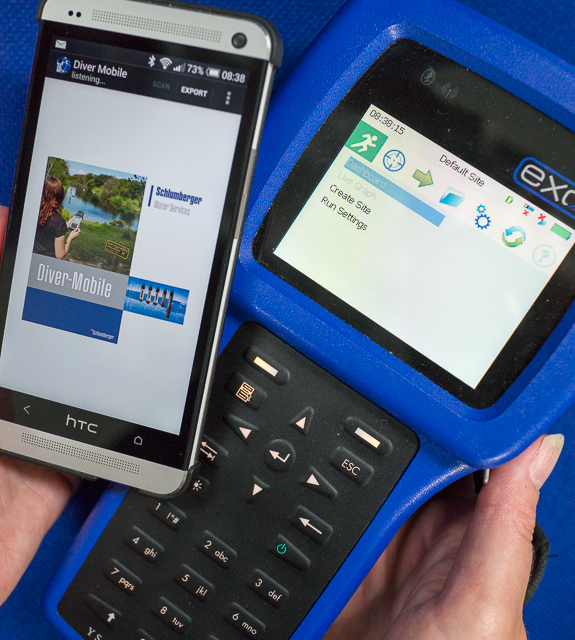 This week, Lewis and I were at Schlumberger Water Services in Delft to iron out some minor issues with Diver-Mobile; a free App downloadable via Google Play or direct from http://www.swstechnology.com/dataloggers/wireless-accessories/diver-mobile. Diver-Mobile is an App for Android devices 4.2 or higher which interface by bluetooth to a device called Divergate which in turn provides the Wifi hotspot which allows data downloads from Diver DXT units. Hard to write, much easier to do.

Diver-DXT is a product which sits at the well head and is connected to a Diver Level Logger by standard MDC cable. Every 15 seconds it sends a signal. If a Divergate is in the vicinity it remains “awake” and automatically downloads the Diver data to the smartphone. Once this has happened it goes back to “sleep” to conserve battery until the next event. Divergate automatically recognises and downloads all devices in range. The DXT has an internal barometric sensor so as to provide compensation data.

It takes 7 hours to drive back from Delft to Haslemere and getting tired of counting cranes and working out the ratio of red cars to blue ones the conversation turned to the robustness and therefore suitability of smartphones for field work. Lewis firmly extolled the virtues… everyone has one, nowadays batteries last longer, rain proof…. For my part I was more conservative mainly because I’ve seen the back of vans of field personnel and believed that smartphones are just too delicate for field use.

In a moment of boredom however I browsed the web and found a review of the new Samsung Galaxy S5… One of the key changes to the Galaxy S5 is the fact that it’s now water-resistant, with IP67 rating meaning you can dunk it water for a short while, although going swimming with it isn’t advised. It’s also dust resistant too, which makes the uncovered headphone port all the more impressive as it makes the S5 much easier to use without having to pull open a flap to listen to some tunes…. Unquote (full article here courtesy of Techradar http://www.techradar.com/reviews/phones/mobile-phones/samsung-galaxy-s5-1226990/review

Am I convinced? Hmm… IP67, dust proof… As a person who is only now just about convinced that a photocopy is an exact replica of the original I feel I want to say not entirely, yet, but I’m far less certain. But give it another year and many other manufacturers will follow the lead of Samsung.

From the Sundarbans, the Congo and Kurdistan, to a Roman fortification at the Eastern end of Hadrian’s Wall in Northeast England, you can find our Window Sampling Systems. This is…