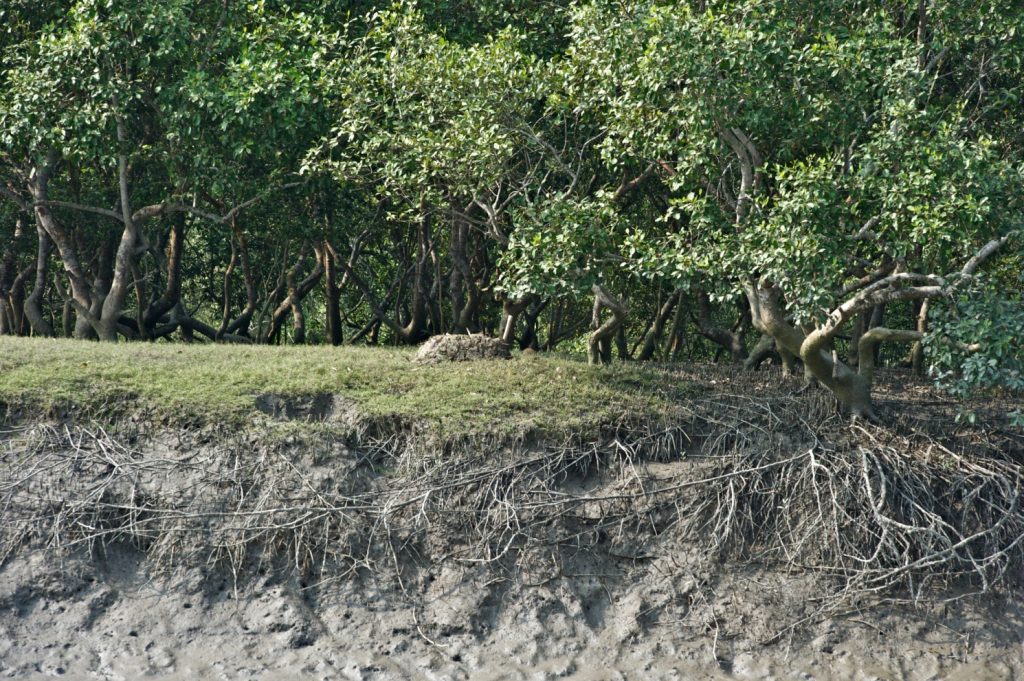 “What could be cuter
Than to feed a computer
With wrong information
But naïve expectation
To obtain with precision
A Napoleonic decision?”

Adding more notes to my ‘to-do’ list I’m left thinking about this short poem by the Russian-American aviation pioneer, Major Alexander P. de Seversky as I make my way into Queen’s. Although my contemplations are broken by the barks and yelps of the family dogs as their owners play fetch with them in the botanic gardens while I make my way into Queen’s. Yes, spring is firmly with us and may it last a while longer than winter!

After settling in the office I begin mulling over the data I have for particle sizes from the Sundarbans still thinking of that poem as I am contemplating whether or not it was appropriate to abandon the particle size distribution (PSD) approach. Early in the development of sedimentology as a discipline (and indeed a lot later), particle size descriptions essentially involved plotting the percentage weight of the sediment against the logarithmic phi scale, thus giving us the log-normal distribution we’re familiar with in grain size analysis, this is a PSD (shown in the first figure). However, the technique has been found to be wholly inadequate for different sediment types, including my own Sundarbans sediment prompting my investigation of different PSDs, including the Log-hyperbolic distribution developed by someone who can really only be described as the ‘Indiana Jones’ of sedimentology, Ralph Alger Bagnold.

Although it’s interesting to discuss PSDs, rarely are there opportunities in this game to discuss the characters behind the approaches and none other are as interesting and colourful as Ralph Alger Bagnold. His academic career, well noted and understood (Log-hyperbolic PSDs, Bagnold numbers, Bagnold’s formula etc…) it is his military career that is something else. Born on the 3rd April 1896, in Stoke, Devonport, Bagnold can only be described as someone with a taste for adventure and for understanding environmental processes. Having travelled to Jamaica prior to attending school, Bagnold at the tender age of five years made his first recordings of hydraulic experiments including the construction of a plasticine model of his family household drainage system in Jamaica. Such an inquisitive mind was fostered by his father, Arthur Henry Bagnold and at Malvern College under the guidance of E.C. Bullock, his mathematics teacher.

Coming from a military tradition (Bagnold’s father was a colonel in the Royal Engineers, his paternal grandfather was a Major-General in the Honourable East India Company) in the autumn of 1914 Bagnold progressed as a cadet in the Royal Military Academy Woolwich, finishing his officers training a year and a half early owing to the outbreak the first world war. Commissioned as 2nd Lieutenant Royal Engineers in 1915, Bagnold would go onto serve in France and Flanders until 1918, having fought at the battles of the Somme, Ypres and Passchendaele with the 19th Corps Signal Company. The end of the war brought Bagnold back to England, where he was invited by his former corps commander, Lieutenant-Colonel F.J.M. Stratton, Professor of Astrophysics at Cambridge University to take an extended leave from the army to study at Gonville and Caius College. Bagnold would graduate with a respectable second class honours degree in engineering. It is after his degree that Bagnold’s interest in sediment really kicks off and it’s the stuff of legend. Having returned to the army and having served in Ireland, England, Egypt, India and Hong Kong, owing to ill health Bagnold took early retirement in 1935 at the rank of major.

It was however the work Bagnold did in the Egypt as a soldier that solidified his place as a memorable figure in the early development of sedimentology. Bagnold was fascinated by the origin and formation of desert sand dunes, indeed he once stated that: “The bulk of the grains flowed as a dense fog, rising no higher than five feet from the ground.” Following his retirement from the army, Bagnold embarked on a serious investigation of these sediments, including wind tunnel experiments at the Hydraulic Laboratory at Imperial College London. He published some papers on these experiments, but his magnum opus: The physics of blown sand and desert dunes was the first real attempt at truly capturing the dynamics of this sedimentary environment.

With the outbreak of the second world, Bagnold was recalled to the army and ended up being posted to Egypt again. Frustrated by the lack of knowledge his colleagues had of the desert and owing to his inter-war experience, Bagnold organised the development of the Long Range Desert Group (LRDG). This was done in order to navigate the desert and attack the German Afrika Corps, wherever and whenever it could. Often hundreds of miles behind enemy lines, Bagnold’s leadership and encyclopaedic knowledge of the desert allowed the allied forces to withstand incessant attacks from Rommel and the Afrika Corps. Always the academic however, in his last days of service in Africa, Bagnold was taken by the Egyptologist Walter Emery to the 5,000-year-old tomb of the pharaoh Hor Aha’ which Bagnold described as “one of the most thrilling days of the [last] war”. Bagnold returned again to England in 1944 to undertake research on the action of sea-waves on the formation and erosion of beaches, prior to the Normandy landings and invasion of Europe.
Although this is only a brief glimpse at the background of one of the greatest sedimentologists of the 20th century, it does show that we’re not all maths and statistics and muck and sand! Indeed I think it’s fair to say that if Indiana Jones was real, his name would be Ralph Bagnold and he’d be a sedimentologist!