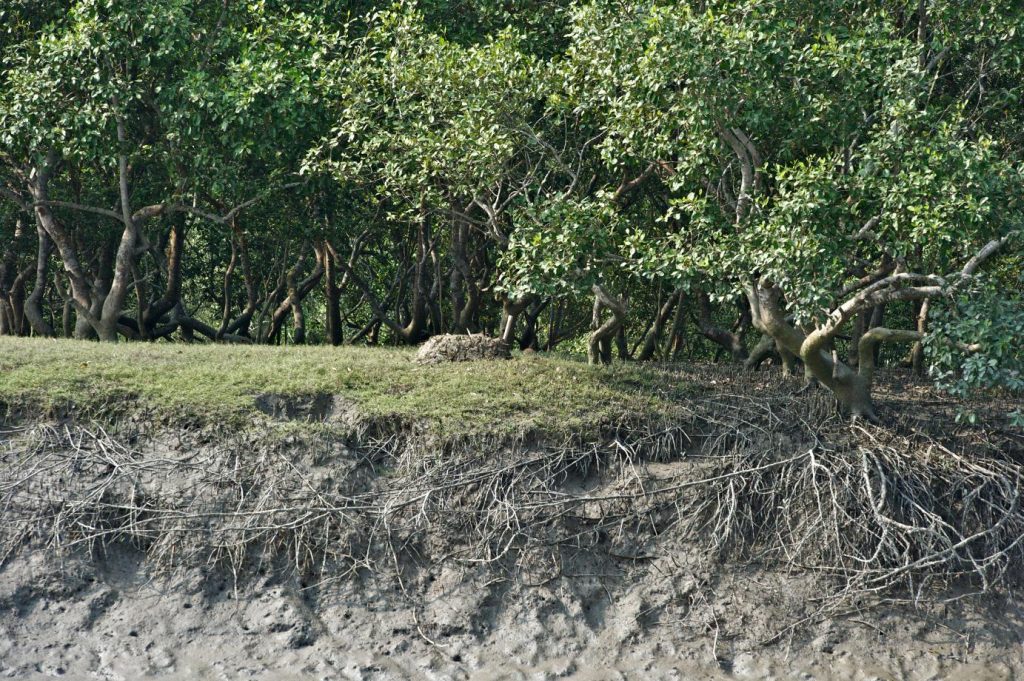 It’s that time of year again folks when silly jumpers become not just tolerated, but actively encouraged! When advent calendars are wholly gorged upon, Shakin’ Stevens sees a boost to his bank balance; and undeclared affection for co-workers at the office party is proffered, that’s right folks it’s Christmas! It is the most wonderful time of the year, however, like the last stanza of Robert Frost’s “Stopping by Woods on a Snowy Evening”, there are still jobs to be carried out and still miles to go before sleep. In the case of this earth scientist, even as Christmas holidays are fast approaching work intervenes in more ways than one in both producing the results and interpreting the data of the late-Holocene (ca. last 5,000 years) history of the Sundarbans, just as the mulled wine is poured!

One of the key, nay vital aspects of understanding the geomorphological (i.e. the landscape interpretation to some readers) of the Sundarbans, particle size analysis of the sediments is crucial. However, it is not so simple just to present descriptions of sediment size (fine material being termed ‘clay’, coarse material referred to as ‘sand’ and the inbetweener called ‘silt) without some sort of a relationship to the environment and this is where interpretation of the data takes hold. Sedimentary environments are dominated by the role of entrainment (picking-up of particles), transport and finally deposition. The challenge however is deriving the mechanisms responsible for these process-environments. Hydrodynamics offers one way of developing an environmental interpretation. Advection of suspended sediments provides the force required to erode the bed and through turbulence, plays a major role in the flocculation of cohesive sediments. Due to the fact that hydrodynamic processes in sediment transport are mainly non-linear, the sediments are very mobile in estuarine systems. Sediments are eroded and transported upwards during the flood, deposited at slack water, with the process repeated in subsequent tidal cycles. So, for marshes in the vicinity of major estuarine systems the particle dynamics will depend upon the estuarine dynamics.

One neat way to seeking some answers as to the estuarine dynamics of the Sundarbans has been through the use of Pejrup diagrams. In estuaries, it’s been found that the relative proportion of clay and silt appear to remain fairly consistent and to some degree, constant. So, these particles remain free from any hydraulic sorting, as clay flocs tend to be fragile and easily broken by the turbulence of water. Thus, within an estuary the percentage of flocculated grain size material (clay) in the mud fraction can therefore be used as an indicator of the hydrodynamic conditions under which deposition took place. So, the less there is a percentage of flocculated material in a sample, the more the flocs have been broken-up and hence, the more energetic the hydrodynamic conditions are.

“
The hydrodynamics conditions of the Lothian Island core are shown in figure 2. What you can gather from this simple diagram really does shine some light on this gloopy, unctuous material! The particle sizes firstly reflect a fining-up of the core, so at the base there is more sand and as one, progresses higher up the core nearer to the present day surface of the mangrove, the smaller the particles become. However, added to this are the energy interpretations to be found. The lower part of the core (called here cluster 2 and 5) is composed of material deposited at greater energy with cluster 1 representing material dropped off at a reduced energy. Now, trying to frame this into the environment, one does require some imagination but allow me to paint a picture. Imagine there is a demure island feature at the end of an estuary. Imagine this island has a mud flat, where one might walk the dogs and take in some fresh air. Now imagine that over time this tidal flat started to ‘disappear’, when really the material that made up the flat began to be moved elsewhere, as the island began to build higher and higher as the tide started to migrate to a greater altitude. Well folks, believe it or not, that’s what we’re seeing in this example from Lothian Island! The challenge which will continue to see me into the New Year will be trying to interrogate how this happens along the length of one of the major Sundarban estuaries. Oh, these holidays couldn’t come any sooner!

With that thought folks, I wish you one and all a very merry Christmas and a very prosperous New Year (lest the Mayans are correct!).