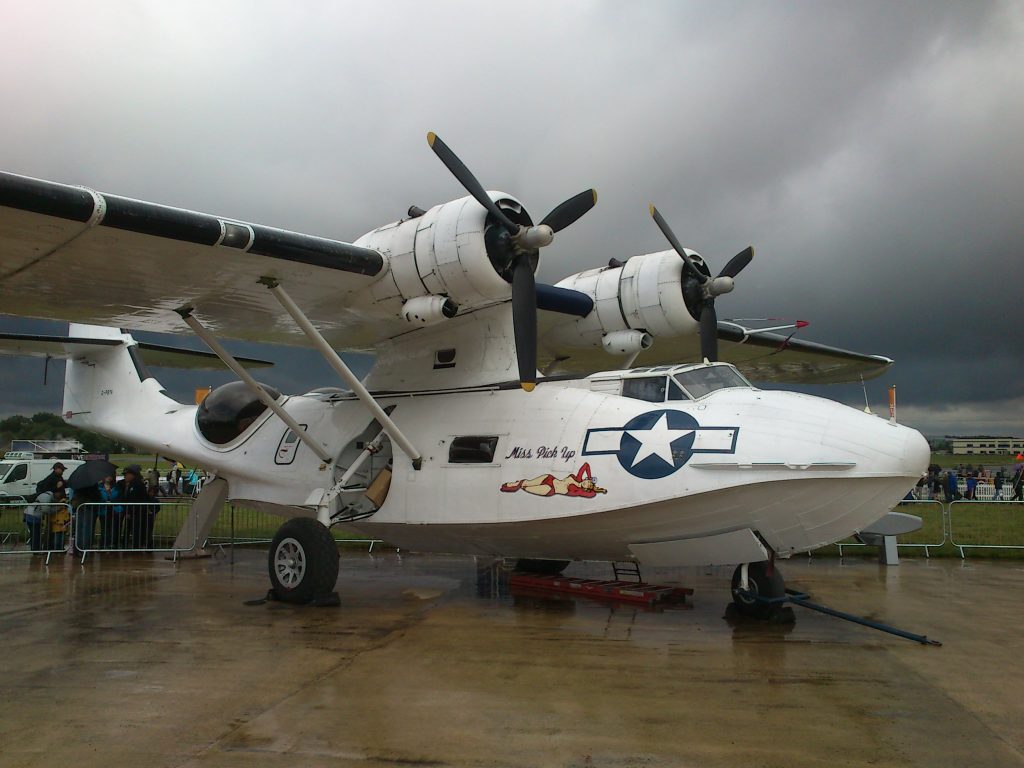 Of the three days we could have gone, we chose the Saturday and yes it rained. I’m referring to the Farnborough Air Show 2012 and this is an event two of my good and oldest friends Mike and Andy along with me have attended on many occasions now. It is sad to say that there was a distinct lack of static displays this time round. There appeared to be larger spaces between them thus giving it that empty feeling and too many commercial aircraft, once you’ve seen one airbus the one parked next to the other one, it may have 2 more engines, but that’s about it. Combined with the fact that the general public weren’t allowed access to the usual halls this time round, it’s where we go to mooch at such things as the Rolls Royce engines, snaffle a few freebies, posters, badges or even a gig stick with some stuff on it, oh yes and not forgetting to get out of the rain.

For me the nicest classic on static line up was the Miss Pick-Up, a Catalina flying boat, the Battle of Britain flight was short one plane this year as apparently the Hurricane wasn’t very well, but the Lancaster and Spitfire made up for it anyway, you just cannot beat the sound of the Merlin roar. Not forgetting the Vulcan Bomber in all its glory, surprisingly noisy on take off, yet crossing over the crowd with nothing more than a gentle murmur, no wonder they never heard them coming when Maggie sent them in.

One of the old favourites that everyone likes to see was also missing, the harrier jump jet which is no longer in service, apparently we won’t get to see the new short take off and vertical landing fighter plane, the F35B stealth until approximately 2018, that’s when they’re due to be in service and on / off our new aircraft carriers. A bargain at more than 100 million pounds each and so far we’ve ordered 48, it doesn’t really matter because by the time we get them they’ll already be well out of date.

There was a sombre feel to the display by the Royal Air Force Red Arrows, as they paid tribute to their 2 lost colleagues who passed doing what they do, these brave, experienced and skilful pilots flew as a formation of 7, aptly introduced as the Magnificent and as always that’s exactly what they were and in this our Olympic year, nothing better than a bit of Red, White and Blue.