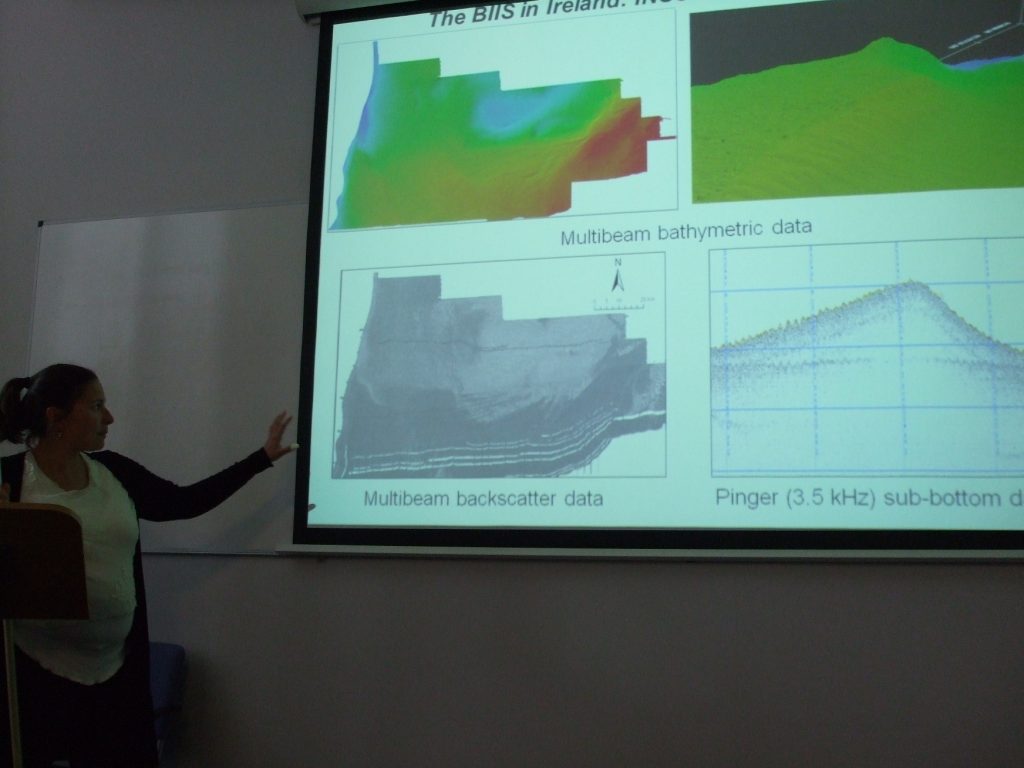 Well Easter has come and gone, I’m sure everyone managed to stock up on many an Easter egg and indulge the sweet tooth/coffee tooth/meat tooth/alcohol tooth after a forty day sojourn! I myself decided to give up some of my time for the forty days and instead took on another task; organising the Irish Quaternary Association (IQUA) Spring Meeting in Belfast. There are many, many ways academics and scientists like to communicate their ideas and results. Peer-reviewed papers are generally the benchmark we all aspire to be held to. Conferences offer such an opportunity to communicate such information without the peer-review process while enjoying lots of sandwiches, tea/coffee and the odd sherry! The IQUA Spring Meeting was targeted specifically at research students and academics engaged in Quaternary sciences research from a broad range of backgrounds to facilitate a greater interdisciplinary communication between various backgrounds. Postgraduates were particularly encouraged to attend and present papers and posters, providing an opportunity for students to engage with the broader Irish Quaternary sciences community as well as experience their first academic conference.

So with this in mind, the task was clear: get speakers and get sandwiches! I had approximately ten or so slots to fill for the day, so it was going to be tricky tracking down people who would be available during a holiday period such as Easter to give a presentation (most people want to not think about their work when they’re on holidays from work!). However, armed with Outlook Express and Google I set forth tracking down people that might be interested in giving talks. Without going into the nitty-gritty in one day alone I sent over forty emails to various academics and postgraduate research students enticing them to a one day conference in Belfast. Perseverance being what it is paid off! I managed to not only get nine speakers (I added myself onto the list of speakers to make up the ten) but nine speakers presenting material on a wide range of topics. From the dangers of tuning proxy archives to late-Glacial and Holocene environmental change in South America, it really was a mixed bag of presentations!

The morning of the 14th of April, while most people are in a restful slumber I awoke before my alarms by three hours at 4:30am! Yes, conference preparations while learning the talks you are giving in less than twelve hours really does get the body out of bed rather sharpish. By the time the conference started I was getting my second wind. Now for a small conference as the IQUA Spring Meeting, one would expect it to be very relaxed and unstressful, and generally one would be correct. However, being a gracious host and in some regards grateful for people travelling all the way up to Belfast from Dublin, Galway and Limerick, so catering was  provided to all attendees. It just isn’t cricket to go to a conference and not get a free lunch! So while chairing a session I was somewhat agitated as I was receiving phone calls form the lost delivery driver, nonetheless with impeccable timing he arrived, sandwiches in hand.

Following the presentations a slight adjournment in proceedings was had with the IQUA AGM, this provided the opportunity for people to get involved with the association and understand how things work. Ah democracy in action! Finally at 4:00pm when the necessary decisions regarding committee business was done, a wee drop of the black stuff (Guinness stout) and tours of the 14CHRONO Centre AMS Facility were offered. A unique opportunity to see the only 14C radiocarbon dating lab in Ireland, something which doesn’t happen too often!

All in all, a great day of talks and posters was had by all and as I browse through the programme abstracts I’m reminded by the words of Richard Feynman; “Our imagination is stretched to the utmost, not, as in fiction, to imagine things which are not really there, but just to comprehend those things which are there”.